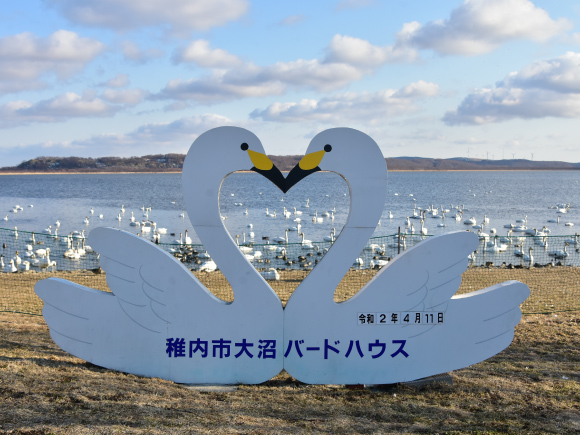 The Onuma Birdwatching Observatory is a log building and opened in November 1994. In addition to the observation room, rest area, and exhibition, binoculars and telescopes can be borrowed free of charge. Large numbers of swans flock to the area in spring and fall, from March to May and October to November respectively. Many other wild birds can also be found in the area around Onuma Marsh, with recorded sightings of over 100 species. Anatidae such as the northern pintail and tufted ducks are particularly abundant, with grey herons and wagtails among the numerous other varieties that can be seen. Onuma Marsh is known as a “swan village” where swans stop to replenish their energy on their southward migration from Siberia in fall and on the return journey in spring. This migratory pattern only began in 1988, when fisherman Yoshinao Yoshida was inspired by his passion for swans to use feeding to entice them to Onuma Marsh, which he had visited every day as a child. This contribution has earned him the moniker “Mr. Swan” . While swans could often be seen flying in the sky, seeing them land on the marsh was a much rarer sight. However, efforts such as building full-scale model swans, playing recorded calls and making kites in the shape of the birds succeed in transforming the area into an important stopover site in fall and spring.