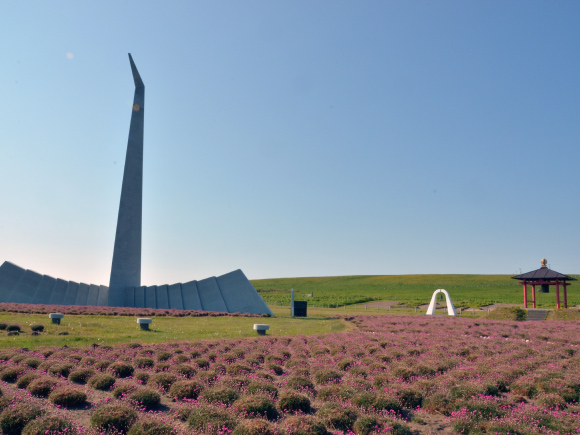 Cape Soya Heiwa Park was created by Wakkanai City in December 1966 and straddles both Cape Soya and the area beyond. Initially a small park, it grew as the number of visitors to the area increased and Cape Soya gained prominence as a sightseeing destination through work such as the reconstruction of the Northernmost Point in Japan Monument in 1968 and the construction of the Akebono Statue on the hilltop to commemorate the 500,000th dairy cow and 1,000,000th ton of milk produced in Hokkaido in 1971. A statue of explorer Rinzo Mamiya and the Soya Misaki Music Monument, which is engraved with the lyrics and score of the song Soya Misaki, were erected in 1980. This was followed by the construction of the Cape Soya Observatory in 1982. In 1985, the Prayer Monument was built to commemorate those who died on board Korean Air Lines Flight 007 and as a monument to everlasting peace. This was followed by the installation of Japan’s first World Peace Bell, created to bring attention to the tragedies of warfare and push for the abolition of nuclear weapons, and the Future of Our Children Peace Bell, which embodies wished for the future happiness and success of children as well as everlasting peace for households, communities and global society. The Miyazawa Kenji Literature Monument was built in 1986 and features a stone engraving of a verse from the poem Soya (2), which renowned Japanese poet Kenji Miyazawa is said to have written on a boat trip from Wakkanai to Sakhalin, while the area around the Northernmost Point in Japan Monument underwent significant renovation in 1988. Armeria maritima, which can be seen throughout Wakkanai City have also been planted in Cape Soya Heiwa Park and every summer the area is lush with the beautiful pink of their flowers.