Monument to the Arrival of Taiho Koki

TOP Monument to the Arrival of Taiho Koki 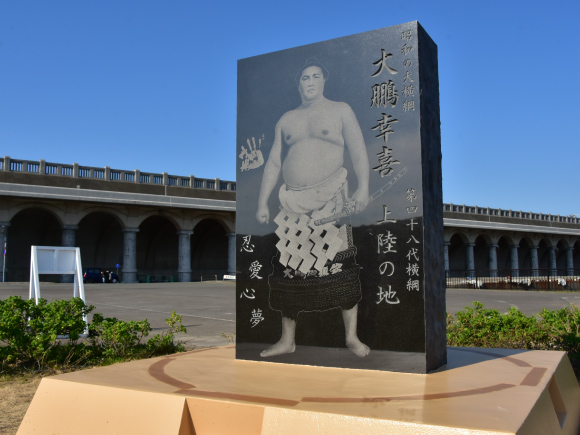 Monument to the Arrival of Taiho Koki

The Monument to the Arrival of Taiho Koki was erected on May 29, 2020 in commemoration of the 80th anniversary of Taiho's birth. On the same day, it was donated to Wakkanai City by the committee responsible for its construction. Taiho was a sumo wrestler in the 1960s and is one of the most notable yokozuna, the highest rank in sumo, of the Showa era (1926-1989). He won 32 championships and was extremely well known and popular during his career. He is regarded by some to be the strongest post-war yokozuna. Taiho was born in Shisuka on Karafuto (now known as Poronaysk, Sakhalin Oblast) in 1940. When the Soviet army invaded Karafuto after the Pacific War in August 1945, Taiho and his mother joined others fleeing to Japan and boarded the Ogasawara-maru from Otomari (now known as Korasov). Although the ship was bound for Otaru, Taiho’s mother suffered from a severe bout of seasickness that forced the family to disembark at Wakkanai Port. The following day, the boat was sunk by a submarine off the coast of Mashike. During his lifetime, Taiho visited Wakkanai several times and said of the city, “I am who I am today because I got off the boat in Wakkanai. I was able to become a yokozuna because of Wakkanai.” (Other sites related to Taiho Koki include the Former Seto Family House and the Wakkanai Karafuto Museum.)