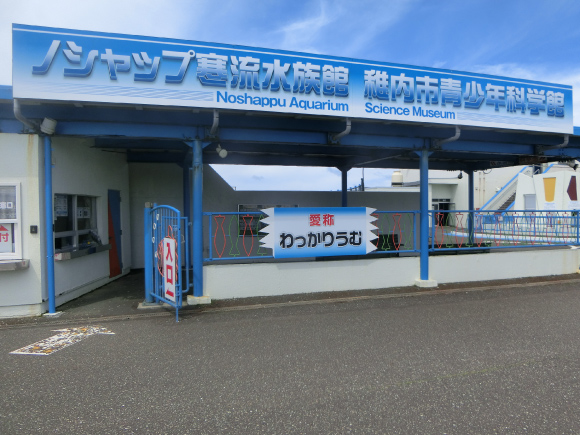 These buildings are Noshappu Aquarium and the Wakkanai Youth Science Museum, known to locals by the collective nickname Wakkariumu. Noshappu Aquarium opened in July 1968 and was the 100th aquarium to be established in Japan. At the time of its opening, the aquarium gained national attention due to the groundbreaking design of the main tank, which offers a 360° view from the center. This 90 t round tank contains northern saltwater fish species such as Okhotsk atka mackerel, Sebastes inermis and righteye flounders alongside Sakhalin taimen, also known as “phantom fish”. The exhibits also feature marine wildlife from the Wakkanai area, including giant Pacific octopuses, red king crabs and sea urchins. The seal and penguin pools are home to adorable animals that are a hit with visitors, including spotted seals and Humboldt penguins. In summer, seal and penguin shows are also held twice per day.  Noshappu Aquarium is mainly home to marine wildlife from cold currents and holds about 1,500 animals from 100 different species. Wakkanai Youth Science Museum opened in July 1974. After the completion of renovation work in April 2014, the entrance was integrated with that of Noshappu Aquarium to encourage visitors to use both facilities. While the Environment Exhibition, where visitors can enjoy learning about renewable energy and global warming, and the Science Exhibition, which features scientific activities, are popular among the children who come to the museum, the Antarctic Exhibition featuring materials relating to Antarctic expeditions is also particularly recommended. Wakkanai is a city with a strong connection to Antarctica and was used as a training site for Karafuto ken (Sakhalin huskies) during preparation for a Japanese expedition to the continent. The Antarctic Exhibition features a wealth of materials ranging from models of ships used for expeditions throughout the years, dog sleds that were used during actual expeditions and antarcticite samples. The science museum’s planetarium has a diameter of 12 m and is the oldest planetarium currently operating in Hokkaido. With data updated on a monthly basis, it guides visitors through the starry skies of Wakkanai and Antarctica.