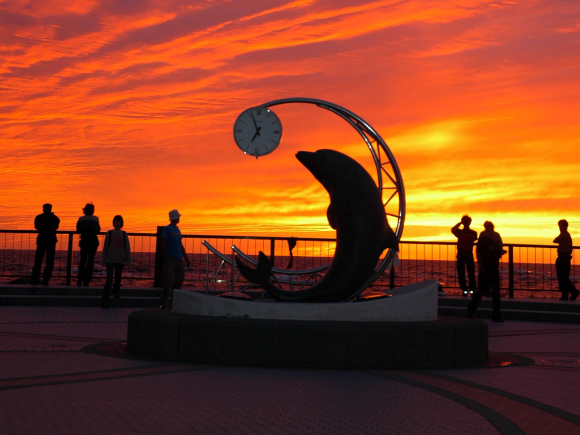 Cape Noshappu is renowned as an excellent place to take in the Wakkanai sunset, with a panoramic view of the Russian island of Sakhalin and Cape Soya, the northernmost point in Japan, with Mount Rishiri and Rebun Island also visible out to sea. Watching the sun set over the islands of Rishiri and Rebun as it sinks below the gently shifting waves is a moving experience. There are two capes near Wakkanai that protrude into the Soya Strait, with Cape Soya, the northernmost point in Japan, to the east and Cape Noshappu to the west. Esandomarigyoko Park is a popular area for photography. It features a signboard for taking commemorative photographs and a monument in the shape of a dolphin that appears to kiss the sun as it sets. Noshappu means "near the cape" or "where the cape protrudes like a chin” in the Ainu language. The sight of Rishiri kelp being gathered around Cape Noshappu in the early mornings of July and August is one of the signs of that summer has arrived. Wakkanai Lighthouse is another iconic element of this coastline, and in winter its vivid red and white coloring marks a striking contrast with the pure white snow that surrounds it. At 42.7 m, it is tallest lighthouse in Hokkaido and the second tallest in Japan, behind only Izumo Hinomisaki Lighthouse (43.65 m) in Shimane prefecture. Wakkanai Lighthouse was also selected as one of the Top 50 Lighthouses in Japan in 1998.