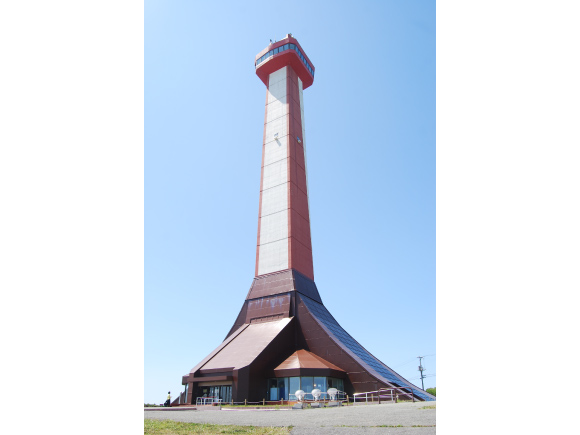 The Wakkanai Founding Centennial Tower is 80 meters tall and was built in July 1978 to commemorate both the 100th anniversary of the founding of Soya Village in what is now Soya District, Wakkanai City and the 30th anniversary of Wakkanai’s designation as a city. The Wakkanai Northern Memorial Museum, which tells the story of the development, history and culture of the city, is located on the first and second floors. The first floor exhibition covers the expeditions of Rinzo Mamiya, who traveled to Karafuto (now known as Sakhalin) and established that it was an island not connected to the Asian mainland, as well as the history of Wakkanai from prehistory to the present day. Materials relating to relations between Wakkanai and Karafuto are displayed on the second floor. Furthermore, the observatory at the top floor of the tower stands 240 m above sea level and offers a panoramic 360° view of the vast Sarobetsu Plain to the south, Wakkanai City and Soya Port to the east, the islands of Rishiri and Rebun in the Sea of Japan to the west, and Sakhalin just visible to the north. The tower is also illuminated at night between June and October.