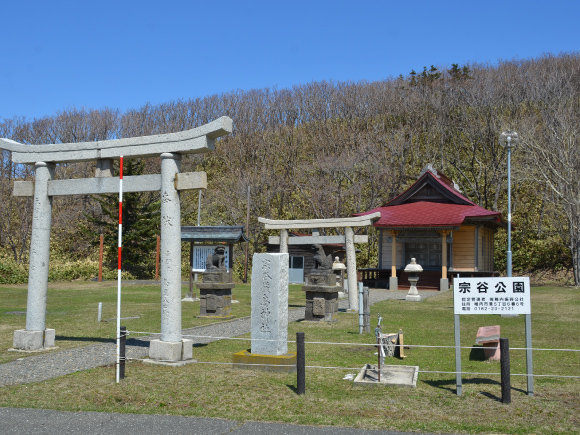 Soya Historical Park features a number of monuments relating to the history of Soya District, the birthplace of Wakkanai City. The Matsumae clan established control of Soya District in 1580, during the Azuchi–Momoyama period. The region is known for its strategic importance as a center for defense against Russia and trading of local products during the Edo period. The Edo shogunate established direct control during the 1800s, and the Aizu and Tsugaru samurai clans were dispatched to protect Karafuto (now known as Sakhalin) and other northern regions in freezing conditions. A government office was established during the Meiji era (1868-1912) and grew to form a focal point for the region.
The historical park was opened in 1970 and features numerous items of cultural and historical significance. These include Soya Itsukushima Shrine, an important historical building in Soya thought to have been built in 1781 and the Former Soya Gokoku-ji Temple, which is designated as a cultural property of Hokkaido. The Former Clan Members' Gravesite marks the resting place of samurai from the Aizu and Tsugaru clans, who gave their lives in defense of this northern region. Soya is also said to be the first place in Japan where samurai drank coffee, and this fact is commemorated by the unique coffee bean-shaped Tsugaru Clan Monument.