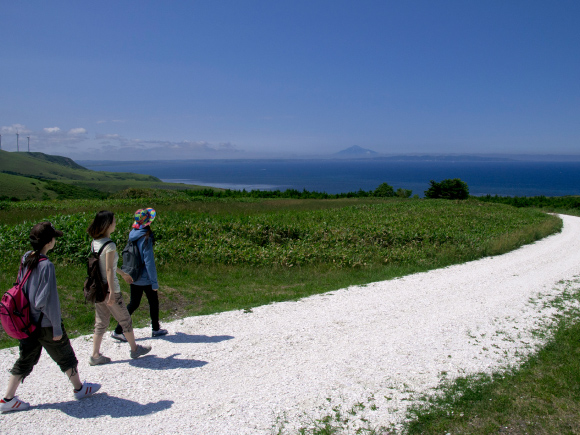 The White Path is a 3 km road through the pastures of the Soya Hills and is laid with ground scallop shells. During the construction of this agricultural road, efforts were made to use materials other than asphalt in order to better harmonize with the surrounding landscape and take advantage of the area’s coastal location. At the time, disposal of scallop shells was also an issue in the local area and means to make use of this resource were being sought. Shells have been used to pave roads in rural regions of Scotland and New Zealand, and it was decided that this would fit the beautiful landscape of the Soya Hills. The road was completed in 2011 following work by Wakkanai City and other related organizations. The white shells used to create the 3km White Path provide a stunning contrast with the green pastures of Cape Soya Farm and the blue of the sky and sea. The area is one of Wakkanai’s most recent tourist attractions, and visitors can take in the magnificent scenery of Soya as they walk along the footpath. There are few roads like the White Path in Japan, and the hills along the way offer magnificent expansive views of Mount Rishiri, Wakkanai City and Sakhalin. The road is also a popular attraction among visitors to Wakkanai from overseas.