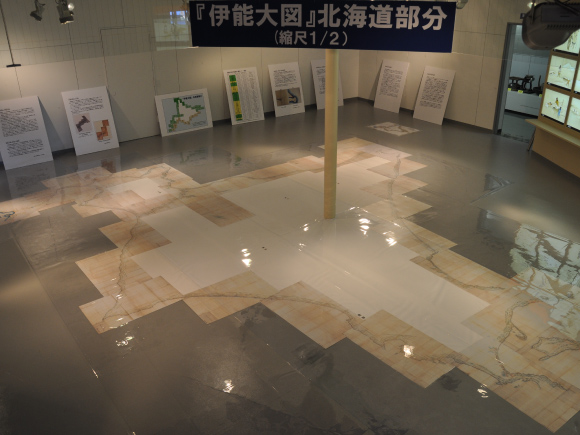 Ino Tadataka (1745-1818) was a surveyor and cartographer during the late Edo period (1603-1868). Dai Nihon Enkai Yochi Zenzu (Maps of Japan's Coastal Area) is an atlas comprising his work and is also referred to as Ino-zu (Ino’s Maps). As the name suggests, these maps are mostly limited to covering the coastal areas of the country.
Ino carried out his work using traversing, which involves connecting survey points along a line of travel, before performing adjustments with position resection and intersection, a method of measuring an unknown position with respect to known positions. While these techniques were the same as those used to create earlier provincial and national maps, Ino was able to create maps that are highly-regarded as pioneering examples of modern cartography by basing his work on a projection that accounts for the curvature of the Earth.
In the year 1800, Ino was ordered by the shogunate to travel to Ezo (now known as Hokkaido) and begin carry out surveying work. Over the next 17 years, he completed ten expeditions surveying coastlines all over Japan. In total, Ino traveled approximately 40,000 km and performed measurements at about 60,000 locations using three types of surveying equipment. His maps show incredible precision as a result of his use of astronomical observation to measure latitude at various points, his creation and use of elaborate instruments, and the impressive frequency with which he performed observations using existing surveying techniques.