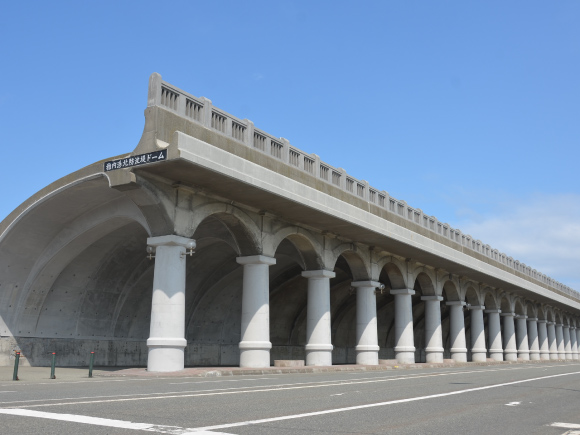 The Wakkanai Port North Breakwater Dome stands at a height of 13.6 m and is 427 m long, comprising 70 pillars. One of the most iconic buildings sights of Wakkanai Port, it was constructed over a period of five years from 1931 to 1936 and was designated as a Hokkaido Heritage* site in 2001. The thick columns reminiscent of ancient Roman architecture and semiarch design come together to create unique construction that has garnered attention from within Japan and around the world. This area was previously used as a port for ferries traveling between Wakkanai and Karafuto (now known as Sakhalin Oblast, Russia). Wakkanai is in a region with strong winds and high waves throughout the year. Before the adoption of the semiarch design, there were cases of waves crossing the breakwater and causing passengers to fall into the sea. As a result, this structure was adopted to provide protection against the waves and wind. The breakwater was designed by Minoru Tsuchiya, a Hokkaido University graduate assigned to Wakkanai City as an engineer by the Hokkaido Government, who was 26 years old at the time. In 1938, the railway line was extended to the end of the North Breakwater Dome with the construction of Wakkanai-Sanbashi station (lit. Wakkanai Pier station). This enabled passengers to proceed directly from the train to the ferry and the area was often crowded with people making the journey to Karafuto. The breakwater continues to protect the people of Wakkanai to this day and celebrated the 80th anniversary of its construction in 2016. The Shiosai Promenade is located in the same area, just in front of the North Breakwater Dome. Completed in 1987, it is one of the few promenades in Hokkaido to be constructed on a revetment. It is 215 m long and is the perfect spot to enjoy the sea breeze while taking in the scenery of Soya Bay. * Hokkaido Heritage is an initiative that designates important aspects of the natural, cultural, historical, and industrial heritage of the people of Hokkaido. (Other sites related to Wakkanai Port North Breakwater Dome and Wakkanai-Sanbashi station include the Wakkanai Karafuto Museum and the Wakkanai Northern Memorial Museum.)