The Northernmost Point in Japan  Monument 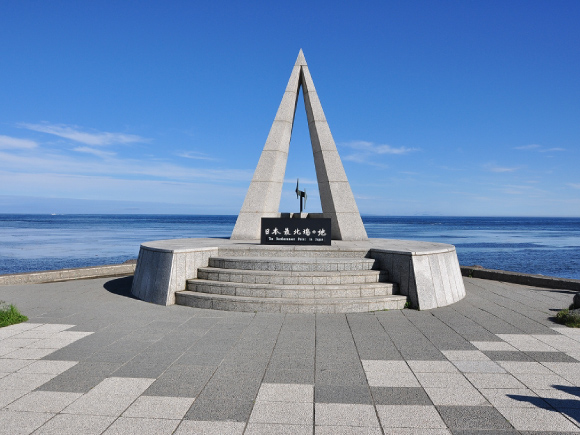 The Northernmost Point in Japan  Monument

The Northernmost Point in Japan Monument stands at the tip of Cape Soya, the northernmost area in Japan outwith the Northern Territories, at a latitude of 45 degrees, 31 minutes, 22 seconds north. The “N” in the center represents the north, while the circle on the pedestal is a symbol of peace and cooperation. Other cities on a latitude of 45 degrees north include Milan (Italy), Montreal (Canada) and Lyon (France). Tokyo and Ishigaki City, the southernmost city in Japan, have latitudes of 35 degrees north and 24 degrees north respectively.
This point was initially marked by stone pillars erected in 1961. As tourist numbers began to grow, the current monument was constructed in 1968 and was subsequently moved 20 m closer to the sea in 1988. While the original height of the structure was 4.53 m in reference to its latitude of 45 degrees, 31 minutes, it currently stands at 5.43 m.
Karafuto (now known as Sakhalin Oblast, Russia) is a former Japanese territory and lies 43 km to the north. In clear weather the island can be seen from the monument.
The northernmost point in Japan is a popular destination for tourists from all over Japan and overseas as well as a common starting point for those looking to tour the entire country. Commemorative Certificates of Arrival at the Northernmost Point in Japan are available from the souvenir shop at Cape Soya.